Type in the keywords “young people” and “coronavirus” on Google and the articles don’t lie about it: “Young people struggle with corona loneliness (NOS)” and “For young people it feels like six years of social isolation (NRC).” The lockdown and accompanying measures have and have had a major impact on young people in the Netherlands. Researchers Loes Keijsers (Tilburg University), Manon Hillegers (Erasmus MC - Sophia), and Jeroen Legerstee (Erasmus MC - Sophia), together with a large research team, wanted to support young people during the corona crisis. They did this by launching the Grow It! app. Grow It! is a serious game that teaches young people skills that help to handle daily stress.

The app was just ready and delivered on the day of the first lock-down measures in the Netherlands, not knowing that the app would be launched in the bizarre time that followed. With the support of the NWO (in the context of fast-track corona) and the Rotterdam Municipality, the app became available within 4 weeks for young people aged 12 to 25 years and quickly had about 800 players a day. The serious game can still be played by young people who are already participating, but registration is no longer possible.

How the app works

The app helps young people get to know themselves better and teaches them skills to deal with stressful situations during the corona crisis. Loes Keijsers explains “Young people receive a short questionnaire five times a day and use it to report how they feel. This method is called experience sampling. They are also asked to reflect on why, for example, they are worried or relaxed. This gives them self-insights into their emotional well-being. The youngsters then do a challenge every day, such as “say sorry to someone”. By practicing those kinds of skills and looking for social support or distraction, young people get tools and learn to deal with stress in everyday life.” Cooperation also plays an important role in playing the app. “In this way, young people encourage each other to complete as many questionnaires and challenges as possible,” says Loes. “By the way, it is not a treatment, but just a helping hand during a stressful time for young people.” 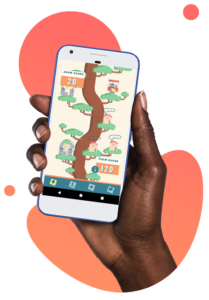 The world as perceived by young people

The project team receives positive reactions from young people. “Young people who participate find it quite fun to do a challenge every day. At the time of the lockdown, they did not go to school, had little structure, and we challenged them every day to do something they may not have done before.” How does an app achieve what professional counsellors often cost in blood, sweat and tears? Different Ingredients have been used for this. Firstly, the app was developed together with young people. Young people were involved from the first idea to the launch. They tested extensively, provided valuable input and feedback, not only about the look-and-feel of the app but also about its content. In addition, the Grow It! app responds to a popular phenomenon among young people, namely challenges. For challenges, youth challenge each other to do crazy things, make a movie and put it online through TikTok. Loes Keijsers: “Adolescents stir each other up to perform all kinds of pranks, including eating a spoon of cinnamon. We thought: why don’t we use that mechanism in a positive way with young people to work on themselves?”

The app not only has a positive impact on young people but also provides the research team with many new insights. “We would like to get real-time insight into how young people are doing during the crisis. We want to know how young people feel when they are lonely, sad, or worried. We gain insights like these with the app. Young people play the game for six weeks, so we can carefully follow and monitor the emotional well-being of the same cohort for a longer period of time.” In addition, the team would like to know what effects this new way of data collection has upon the adolescents. Do young people indeed learn the intended skills? Do they really cope better with stress when they play the game? The app is still in the development phase and the team is learning from all the experiences of users, which is needed for the research team to improve the app in the future. A final goal is to use the data from the app to build future algorithms that aid in an earlier detection of depression in young people.

Need for early detection and prevention of depression in young people

The app originated from a collaboration between Manon Hillegers (child and adolescent psychiatrist) and Loes Keijsers (adolescent psychologist). Loes specializes in the normal development of young people and Manon sees young people in het clinical practice when they develop disorders, such as depression. Often times, young people have been suffering from depressive symptoms for years before seeing a child and adolescent psychiatrist. According to them, this is a missed opportunity. Young people often have negative emotions and mood swings during the day, which may predict the development of depressions. However, learning how to cope well with daily stress may prevent this. “We are both of the opinion that there is a need, on the one hand, for early detection and, on the other hand, for prevention of depression in young people. However, looking at the world through the lense of an adolescent, prevention which is offered by a professional who gives homework assignments may not fit with their ideal world.” By thinking about what motivates young people, they came up with the idea of the app with fun challenges. As researchers, they looked for social partners and funding partners, and with a strong and motivated project team around them, the realization of the app became a fact.

The project team consists of researchers from Erasmus MC and Tilburg University.

The app was developed with game designers from Ijsfontein in Amsterdam. Spryng helped with the text messaging services and the NWO (The Dutch Research Council) and the Rotterdam Municipality were offering support in terms of the funding.

Would you like more information about the study, the (funding) partners, or the project team? Take a look at the website of the Grow It! app.